November 24, 2022 — For the first time in the Philippine history, a comprehensive report on the status of physical activity of children and adolescents was launched on 22 November 2022 at the Hive Hotel and Convention Place, Quezon City through the initiative of UP Diliman College of Kinetics in collaboration with Active Healthy Kids Global Alliance (AKHGA) and the support of Sun Life Philippines.

The report card, which serves as a communication tool for increasing awareness, was an outcome of a wide-scale assessment of scientific papers and national surveys aligned with the methodology of the Global Matrix 4.0 Project which is under the oversight of AHKGA. The goal of this global initiative is to “have a better understanding of the worldwide variation of children’s and adolescents’ physical activity (PA) and correlates”. 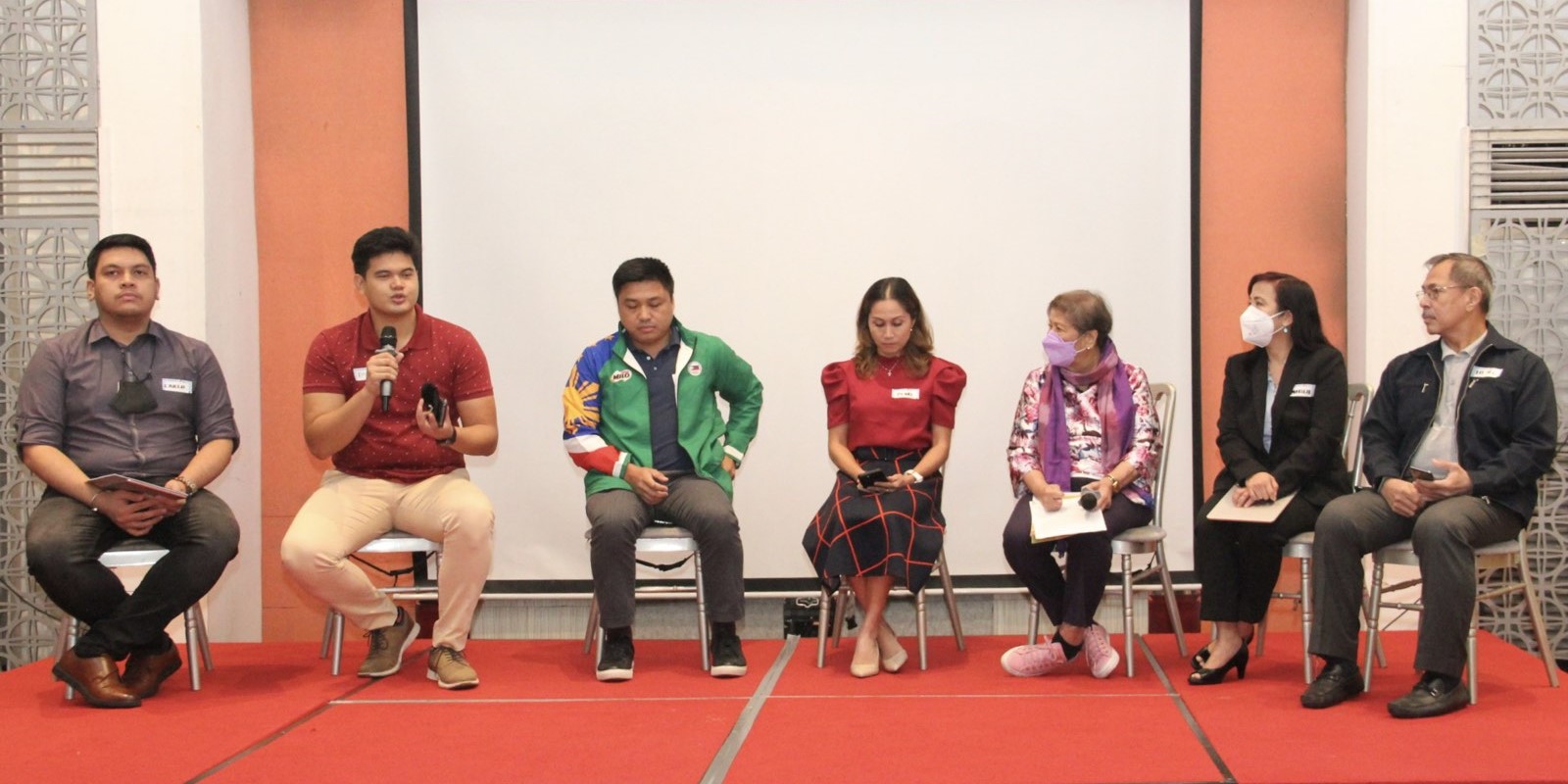 Strategically, the Philippines participating in this kind of activity enables the country to paint, gradually, the statistical picture of the long-standing problem of sedentary lifestyle and its implications among Filipino children and youth. It is also deemed instrumental in locating the opportunities for public and private sectors in bettering policy implementations or creating future endeavors for this relevant cause.

With a plethora of public health concerns linked to physical inactivity such as mental health issues and other non-communicable diseases, plus the immense economic risks that sedentary living pose to the future lives of the next generation, the report was identified as a significant milestone to call the attention of the Department of Health in making this issue a priority concern.

UP Manila College of Allied Medical Professions Dean Maria Eliza Aguila added that this should also be a joint effort of the different sectors in Philippine society. “Everyone of us here has a role to play – individually, as groups, as civic society, communities, not just the local and national government, but also globally [in taking] initiatives”, she remarked. The goal of this global initiative is to “have a better understanding of the worldwide variation of children’s and adolescents’ physical activity (PA) and correlates”.

Among the ten indicators classified by AHKGA for the Global Matrix 4.0 project, only half were assessed for the Philippines due to the overall lack of evidence for the other indicators.

The 2022 Philippine report card suggests that the existing government policies supporting the PA of children and adolescents are sufficient to promote the physical well-being of the youth, thus, a score of B in the government indicator (Please refer to the grading criteria shown in the figure below).

A same grade was attributed to sedentary behavior indicator which refers to any energy expenditure while being in sedentary posture (i.e. sitting, lying down etc.). According to the Global School-based Student Health Survey (GSHS) Philippines 2015 data, only 32% of Filipino adolescents spend three (3) or more hours a day for online recreational use. However, the GSHS survey failed to capture time spent using newer devices such as mobile phones and tablets, which Filipino children and adolescents are most likely to own and use. The grade would most likely be different if data on time spent using these portable devices is available.

According to Dr. Jonathan Y. Cagas, AHKGA country leader for the development of the 2022 Philippine report card and associate professor at the University of the Philippines Diliman College of Human Kinetics who presented the findings, the Philippines was doing good only on these two indicators. In terms of school and active transport, which are the two other graded indicators, grades were found relatively low. 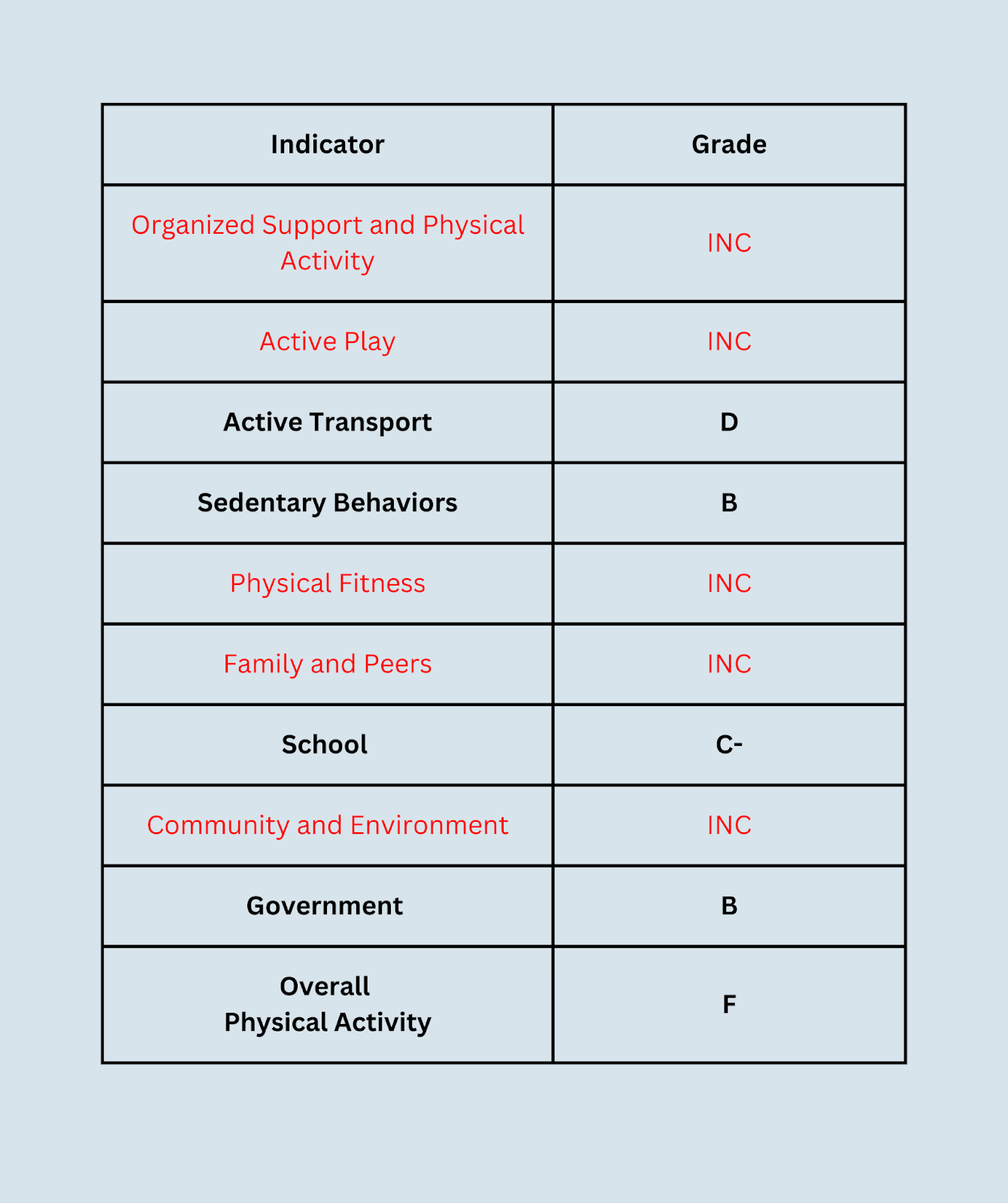 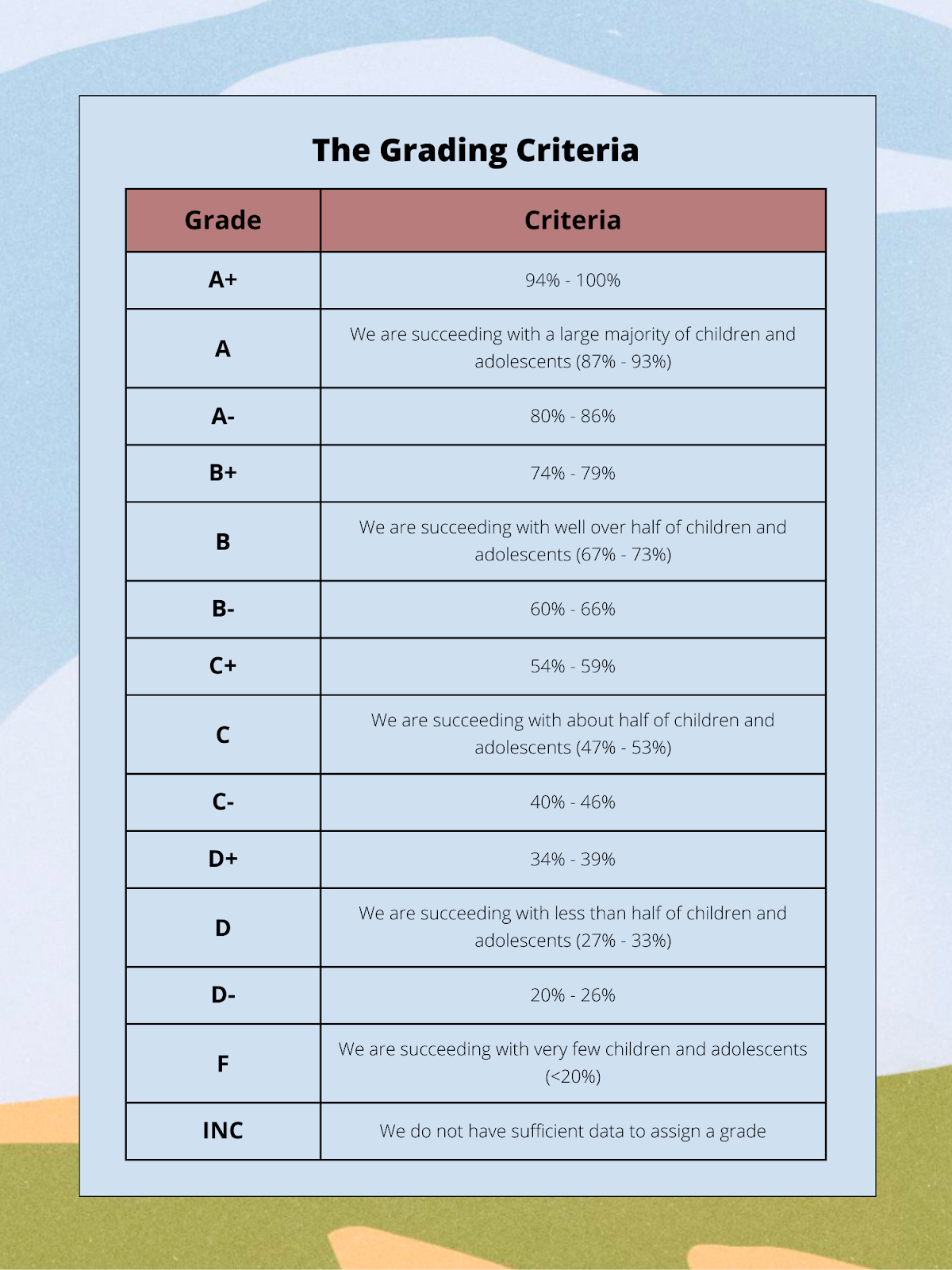 Based on the GSHS Philippines dataset which provides that only 46.5% of Filipino students attended physical education (P.E.) classes on three or more days each week in 2015, the school indicator was graded C-. The investigators argue that this low grade may have been due to insufficient data as it did not account for other forms of sports and physical activity programs being offered in schools. In terms of active transport indicator or any activity used for transportation such as biking, walking, and skateboarding, Cagas reported a grade of D grounded from the analysis of 2015 GSHS data.

While this may be a glooming finding from the report, AHKGA-Philippines and its partners see this as the first crucial step to addressing the issue on a larger scale. As Sun Life Chief Client Experience and Marketing Officer Carla Chong said, “how can we solve a problem we do not understand?” It is important that there is now evidence that can be used to future proof the next generation from the negative effects of physical inactivity. 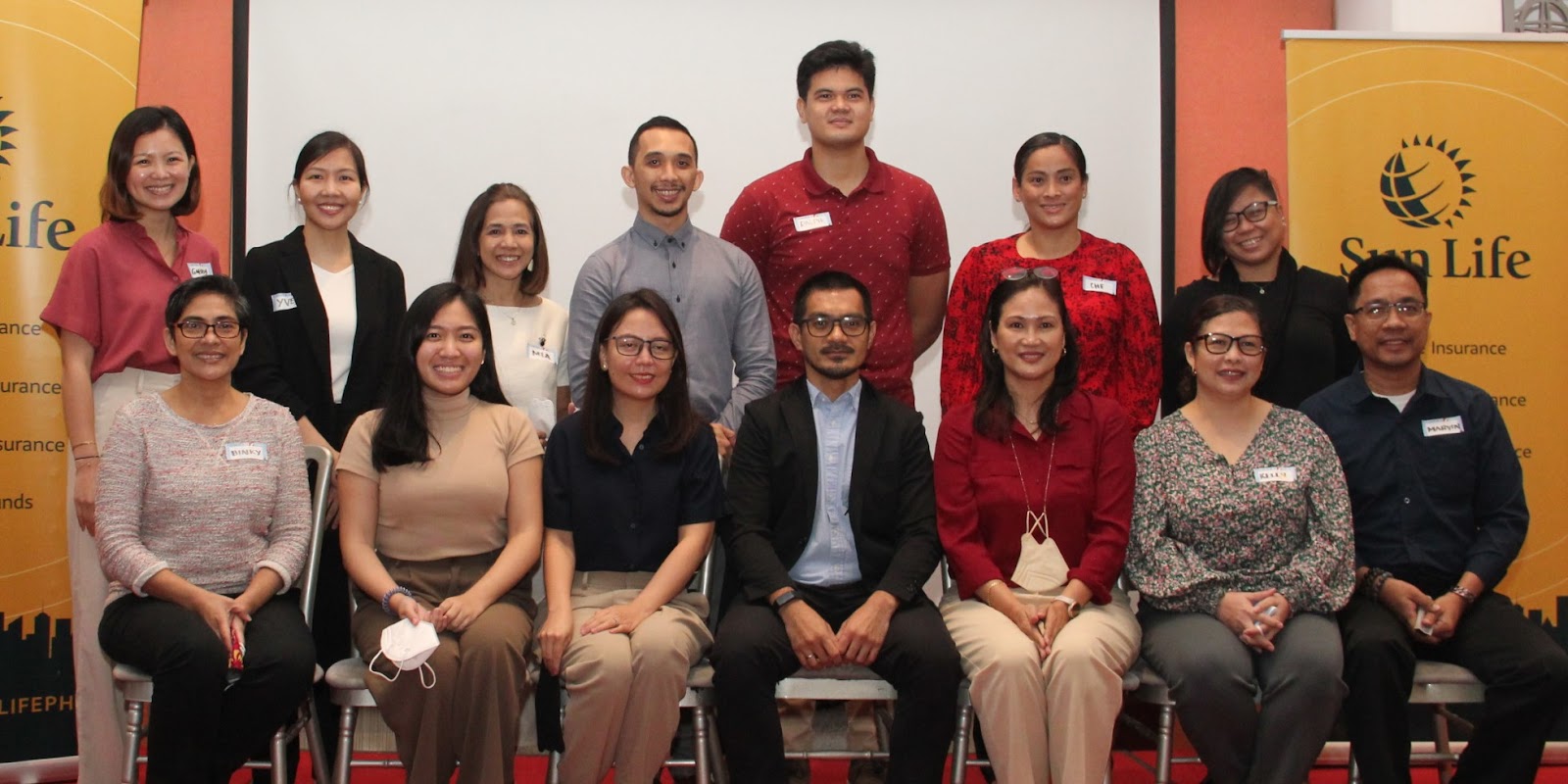 Towards the succeeding years, the investigators vowed to deepen the cascading of national data to create a clearer picture of where the Filipino children are now, especially with the exposure to the effects of Covid-19 pandemic, in terms of the prevalence and second-hand smoke of sedentary living.

Hosted by Assistant Professor and College Secretary of the UP Manila College of Arts and Sciences Guiller Realin and faculty member of UP College of Allied Medical Professions Ms. Audrey Esguerra, the launching event ended its program with a panel discussion graced with the presence of different representatives from various sectors: Assistant Professor Ralph Ramos from the UP College of Human Kinetics, Associate Professor Hercules Callanta representing the Philippines Association for the Study of Overweight and Obesity (PASOO) and “Exercise is Medicine”, Dr. Maria Eliza Aguila, dean of UP Manila-CAMP, Ms. Mary Ann Fernandez Mendoza, president of Health Justice Philippines, Mr. Carlo Romero, chief academics officer of the National Academy of Sports, Ms. Pearl Managuelod from Muay Thai Association of the Philippines to represent the National Sports Association, and Mr. Carlo Sampan from Milo-Philippines.

Active Healthy Kids Global Alliance (AHKGA) is a non-profit organization composed of a pool of researchers, health professionals, and stakeholders who are eager to advance PA in children and adolescents on a global scale. 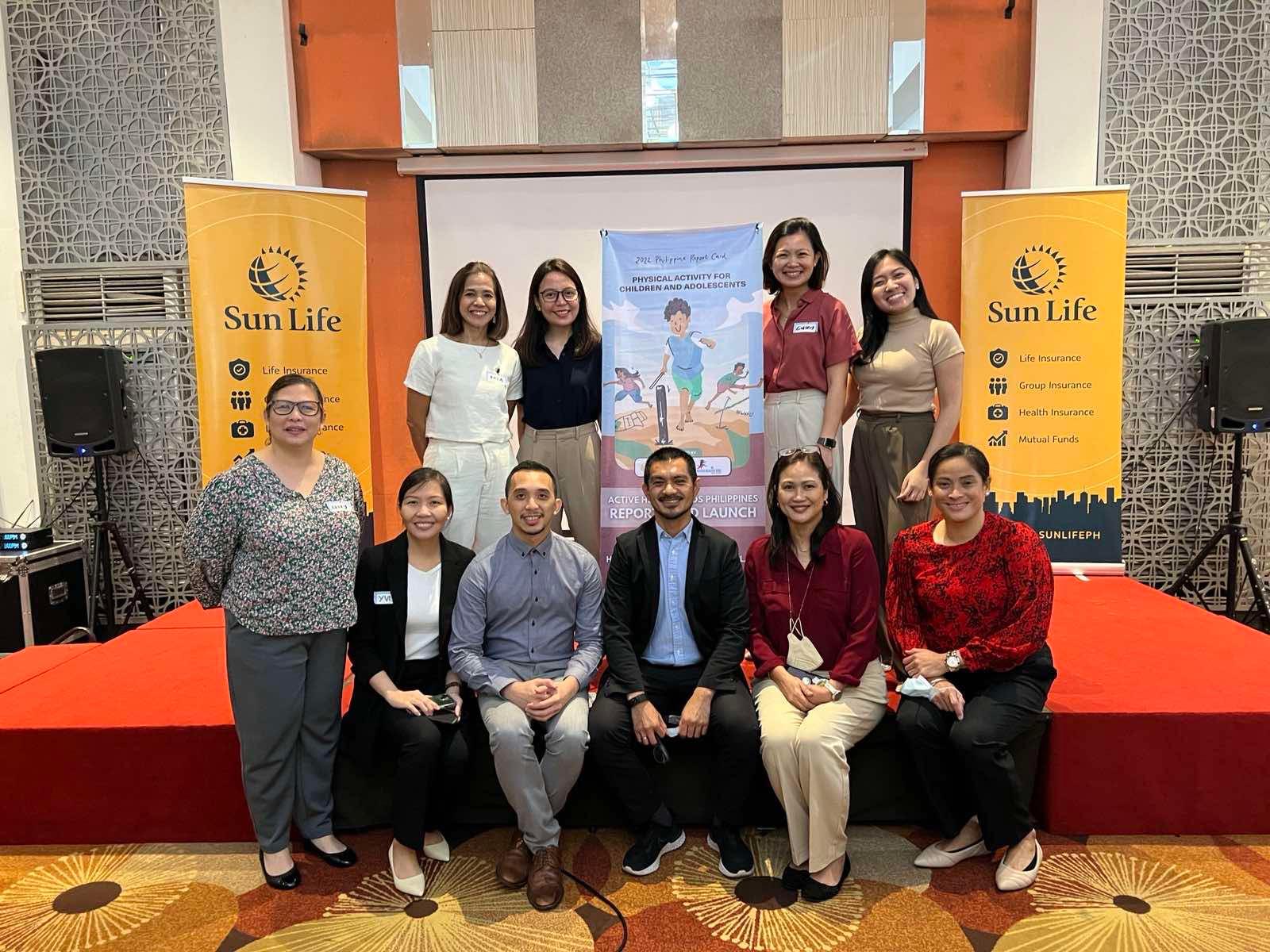 Faculty members from the UP Manila College of Arts and Sciences and College of Allied Medical Professions who contributed to the development of the 2022 Philippine Physical activity report card.